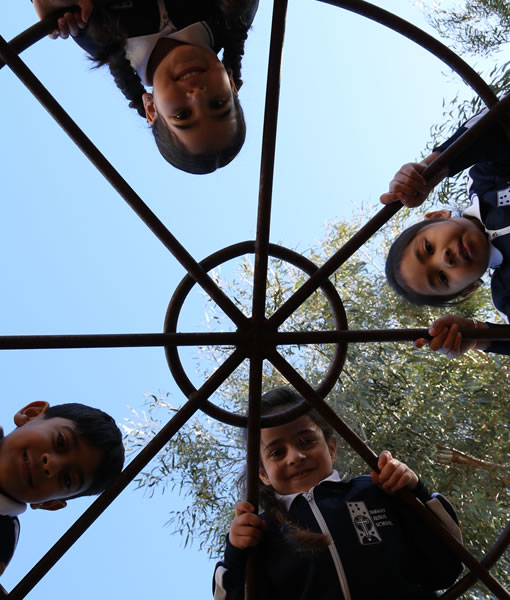 Infant Jesus School was established in 1954 by the Dominican Sisters to support the Catholic families in the Parish to pass on the faith and to provide a quality Catholic Education.

The first School was opened on a site in Walter Road and was called St Paul. The school opened with an enrolment of 22 children. The two teachers in charge of the school were Sr Joseph and Sr Dominic. In 1956 the Carmelite Fathers took over the Parish. By the end of 1960 the School in Walter Road had become too small and was unsuitable as children were now enrolled in the School from Year 1 to Year 7. Late in 1960 a 4 acre block was purchased at the corner of Smith and Russell Streets and a new building was built at a cost of 14 500 pounds. The new School had four classrooms and was built in plain white bricks. In 1964 the Parish Pre Primary was built. This was followed in 1967 by the development of the tennis courts at the school. By 1965 there were 230 children enrolled in the school.

Learn more about our history

Our saints remind us of the Dominican heritage of our school. They were truly remarkable people who deserve to be remembered and honoured by our school community.

Dominic was a Spaniard from Castile. He was born in Calaroga. His family were minor nobles prominent in the reconquest of Spain from the Moors. At the age of seven, Dominic went to live with an uncle, who was a priest, to learn reading, music and altar service. At twenty he studied theology and was ordained a priest at twenty five. He went on to found the Dominican order of preachers. He chose a life of poverty, study and prayer. His followers have been called “Domini canes,” the watch dogs of the Lord and it is from Dominic that we have inherited our school motto VERITAS which means Truth.

Thomas was born in a mountainside castle in Southern Italy, not far from the great Benedictine Abbey of Monte Cassino. His father was the Count of Aquino and his mother, a noblewoman from France. When he was five years old, Thomas was sent to Monte Cassino to study to become a monk. Thomas continued his studies in the University of Naples. While he was there, he started attending the Dominican church. The Dominicans sent Thomas to study in the best schools in France and Germany. Thomas excelled in his studies and wrote many books. His last and greatest book was the Summa Theologica. In it Thomas tried to answer the question, “What is God?” Thomas believed in sharing his knowledge. He once said, “Communicating one’s thoughts to others is greater than merely thinking.”

Catherine Benincasas was the twenty fourth child born into her family in Siena, Italy. Her father was a skilled dyer and tanner of leather. As people came and went from his shop, they brought news of happenings around Europe which included the terror of the black plague. From a very early age, Catherine listened and learned much from these travellers. She discovered that the Pope was in France and that this fact, along with the misery caused by the plague, was resulting in people losing their faith in the Church. When Catherine grew older she refused to marry, much to the frustration of her parents. She decided instead to join the Third Order of St Dominic. She was questioned by the high officials of the Church and they confirmed that she was indeed, wise and holy. She was sent to France and was not only successful in persuading the Pope to return to Rome but also obtained permission from the King of France to allow him to do so. Catherine died in Rome at the age of thirty three. She, like Thomas Aquinas, was named a Doctor of the Church. It is an honour held by few men and even fewer women.

Isabel de Flores was born in Lima, Peru. Her skin was so soft and pink that they called her Rose and that became the name she was known by. Rose shunned the idea of marriage and joined the Third Order of Saint Dominic. She also worked to help her parents support their family of eight children. In addition to this, Rose also opened a free hospital for the poor who had no access to medical aid. Lima is a coastal city and was often attacked by pirates. In one incident the pirates got through a navy blockade which was trying to protect the city. The pirates stormed the cathedral where the women and children were sent for safety. When the pirates crashed through the door, Rose faced them fearlessly, standing directly before the altar. The pirates were so taken aback, they left the city without harming anyone. Rose became the most celebrated person in Lima. This had little effect on her and she continued her work regardless. However, long hours of work took their toll. At the age of thirty, she got ill and died. All of Lima grieved for a woman they believed had saved their city.